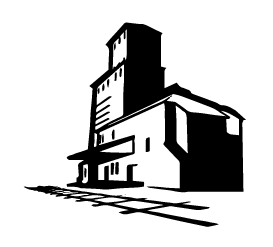 FROM GRAIN ELEVATOR TO FAMILY RESTAURANT

While The Depot Restaurant has made this 1906 grain elevator look like a new and improved building, there is certainly some interesting history surrounding the building

From 1931 to 1994, the grain elevator was owned and operated by Hancock County Farm Bureau Co-Op. A local Greenfield farmer later purchased the elevator through a private sale. Throughout the years, several major structural changes were made to the building, creating the remarkable structure you see today.

Beginning in 1945, renovations to the elevator began to take place due to the double-tracking system being installed by the Pennsylvania Railroad that ran through Greenfield. Because of this installment, 12 feet of the elevator would need to be removed in order to make room for the construction of an additional unloading site and to accommodate any updates that were being made to the railroad system. In 1946, additional construction began at the elevator by adding a 50-ton scale, the basement started being dugout, and the first story of the elevator was being built. In addition, the 112-foot tall towers were added to the elevator. These were used to accommodate larger vehicles and added storage capacity that was previously lost during the double-tracking of the Pennsylvania Railroad.

As the elevator began its operations, it had facilities used to buy and store wheat. At this time, it was reported that the yield of wheat was averaging from 25 to 28 bushels to the acre. The price of No. 1 wheat was $2.28 per bushel while No. 2 wheat fell 1 cent below at $2.27 per bushel. The overall storage capacity was around 40,000 bushels of grain in its four huge bins.

The elevator took approximately two years to complete, as partially tearing down structures and having to rebuild them proved to be very time-consuming. Many have reported that during the time of construction, several returning World War II service members took part in the construction of the elevator. The building has been empty for the last twenty years and the last known semi to go through was in 2003

In April 2020, Depot Street Investments purchased the grain elevator to avoid demolition by the City of Greenfield due to concerns for its structural integrity. (While the elevator’s structural integrity has proven to be intact, the metal outside was a totally different story!) Members of Depot Street Investments are all local business owners who grew up in Greenfield and have fond memories of the elevator and its property. They love hearing the stories from our community members of their time spent working in the elevator or of their personal childhood memories. The owners didn’t want to see such an important piece of the city’s history be destroyed and chose to restore the building to its past glory so families can continue to visit and make memories.

When entering The Depot, you will truly be astounded at the history that has been preserved by Depot Street Investments. From the building and woodwork itself to the machinery, official signage, and the original basement on display, The Depot is incredible. We hope each time you join us, you are able to find something new and interesting about the building just as we have! The Depot looks forward to providing a unique space for the City of Greenfield and surrounding communities to come together and enjoy!